A hundred years ago noise on the main streets of the world`s biggest cities did not exceed 61 decibels. Today it is 100 and more. Industrial noise is at very high level at many factories, and in some it reaches 90 to 110 decibels. 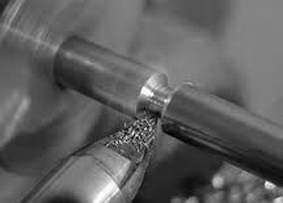 Noise is an ever growing inconvenience of modern life and much of it is generated by vibrations of metals. These vibrations not only cause noise but can also lead to fatique and consequent failure of a structure.

Research into methods which can minimize vibrations in structures is therefore of considerable importance. These are two methods to reduce vibration in an engineering design. Either we make the structure so stiff and heavy that it cannot vibrate significantly or we introduce damping into the structure, that is, we have to introduce some mechanism for the absorption of energy within the system.

To apply damping coating is standard practice today. The damping coating are usually made of plastics and are applied to sheet metal shells such as car bodies. This method is often cheap and has the advantage that the coating can be applied precisely where damping is required. But these damping coatings may be efficient for certain sound frequencies and temperatures.

So metallurgists were interested in the possibility of metals that are strong and tough enough to be used in structures. But they must also possess a high inherent damping capacity that is independent of frequency and less temperature dependent than that of plastics.

Scientists want to combine some of the properties, which characterize steel, with high damping capacity of lead and to produce a material that could be used to minimize noise and vibration. This can, in fact, be done with several materials, the most outstanding of which are alloys of manganese and copper. These alloys can be stronger than ordinary steel, with similar toughness and hardness, yet they have a damping capacity nearly 50 times greater than that of steel.

However, noise and vibration are problems to be faced by engineers. It is seldom sufficient merely to replace a troublesome component with one of a high damping alloy. The particular characteristics of these high damping structural alloys should be properly employed. As a result, perhaps, the future will be a little quieter – in some respects at least.