Automobile racing is a thrilling sports that tests the speed and performance of automobiles and the skill and daring of drivers.

Each year millions of spectators around the world attend a wide variety of automobile races.

Much of Auto racing organization popularity lies in the great variety of racing cars and racing events. The cars range in size from small, open carts to large closed sedans. However, all racing cars can be devided into two major groups, production cars and cars built specially for racing. 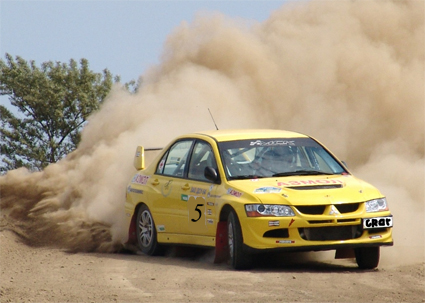 This sport began in 1890. The first races were run on open-road courses, which consisted of public roads between towns.

Many of the courses were hilly, sharply winding dirt roads. Driver often lost control of their cars and crashed, sometimes injuring spectators standing along the road. The world`s first automobile-racing organization, the Automobile racing Club de France, was established in 1895. Later that year, it supervised the first actual automobile race – a 732 mile round trip between Paris and Bordeaux, France. Twenty-two drivers started in the race and only nine finished. The winners averaged 15 miles per hour.

The earliest racing cars were simply the first automobiles. These heavy, open vehicles had poor brakes and were hard to steer. The main way to increase a car`s power for racing was to make its engine bigger. However, technological advances during World War 1 enabled car designers to produce more power from a smaller engine. Competition among carmakers also hastened the development of racing cars.

The development of the rear-engined racing car in the mid 1950`s revolutionized the sport. Drivers no longer had to sit upright to see over the engine. Instead, they could lean back and so conform to a car`s streamlined body. Placing the engine behind the driver also improved the car`s weight distribution and provided better traction.

Automobile racing organization is a highly dangerous sport, but many steps have been taken over the years to make it as safe as possible for both spectators and drivers.

Strong guardrails and heavy fencing protect spectators from car that have gone out of control. A driver`s most important piece of safety gear is racing helmet, which has a hard outer shell, made of fiberglass or carbon fiber and a foam cushioned, flame resistant lining. Drivers also wear flame –resistant clothing from head to toe, sometimes including a special facemask. Lap and shoulder belts are standard safety equipment on Automobile racing cars. Every car also has built in structure to help protect a driver`s upper body if the car rolls over. A Automobile racing car without a roof has a roll bar, a dome-shaped bar that arches over the driver`s head. A car with a roof has a roll cage, a structure of steel tubes that prevents the roof of an over turned car from collapsing. A racing car carries fuel in a leak-resistant fuel cell within a metal or plastic fuel tank. Many race sites have medical facilities to provide emergency treatment to injures drivers in case of a crash. In some cases, helicopters are available to rush injured drivers to nearby hospitals.